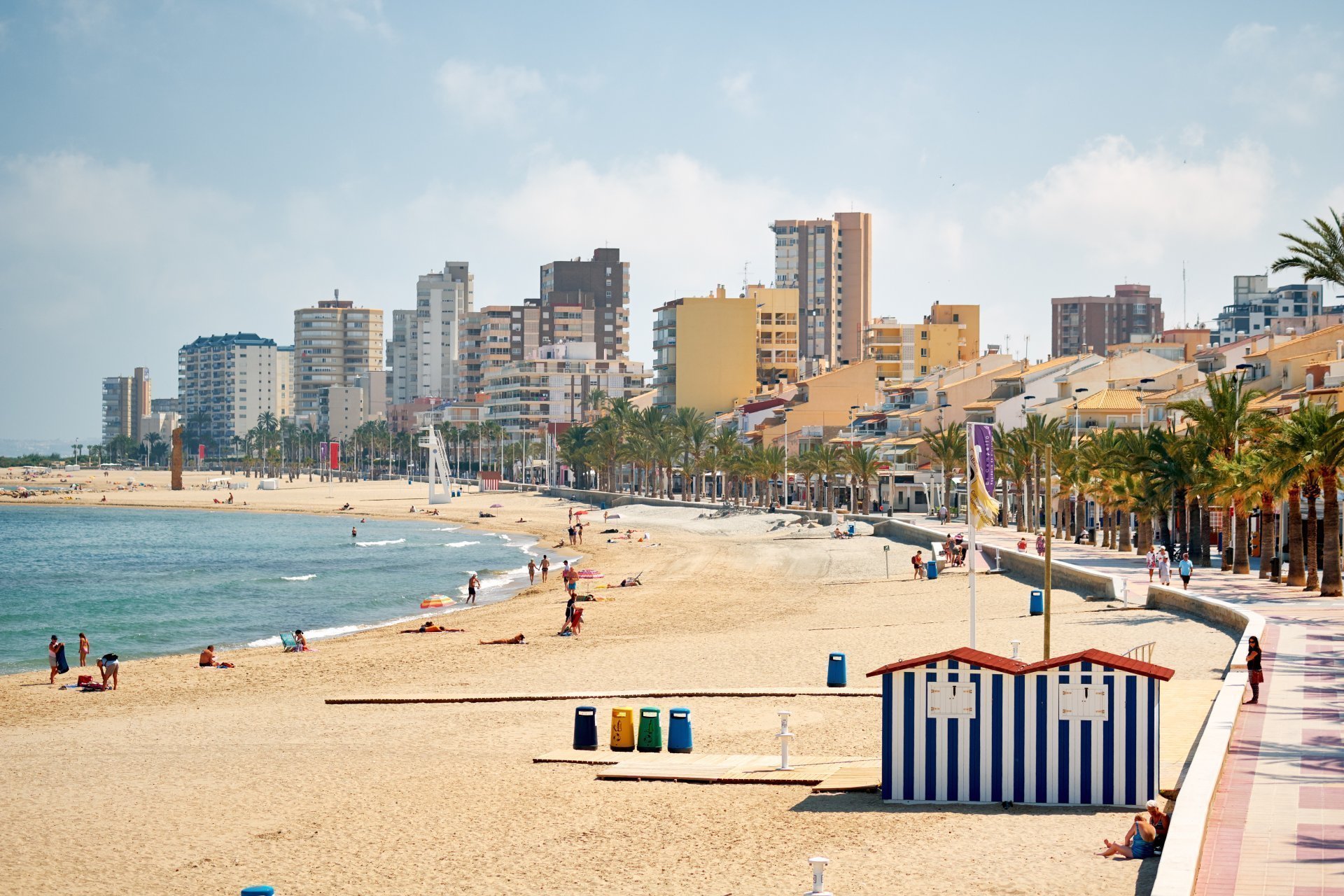 El Campello is a municipality in the province of Alicante, in the Spanish autonomous region of Valencia. This attractive seaside resort extends over an area of ​​55.27 square kilometers and has approximately 29,000 inhabitants. In the summer, however, the number of inhabitants increases sharply. El Campello is a stone's throw from the Spanish metropolis Alicante. There you will find an international airport that is connected to various Dutch and Belgian airports. To reach the city of Valencia - also with an international airport - it takes about an hour and fifty minutes in the car. For a trip to the popular resort of Benidorm, you are only half an hour away. Furthermore, Santa Pola, Villajoyosa, Altea and Calpe are easily accessible from your home in El Campello.

El Campello's greatest asset? The beautiful beaches on the local coastline, which is no less than 23 kilometers long. You can pick a spot on your favorite beach undisturbed and enjoy a summer dip in the clear Mediterranean Sea. Tourism is important to the local economy. El Campello therefore has the necessary facilities for a pleasant holiday or a longer stay on the Costa Blanca.

What to do in El Campello?

The story of El Campello goes back centuries and even several millennia. The peninsula of La Isleta used to be an island that was separated from the mainland by an earthquake. In the twentieth century it was reconnected with the rest of El Campello. The archaeological site Illeta dels Banyets - as this place is called - is of great historical and archaeological importance with a history of more than 5000 years. Remains from the Bronze Age and from the period of the Romans and the Iberians have been found. From Roman times there are still rocky basins in which fish were raised. They are called the Baños de la Reina, because they are said to have been the baths of a Moorish queen. You can take a nice dip and immerse yourself in the rich history of El Campello.

El Campello would become part of the city of Alicante from the middle of the thirteenth century and thus fall under the Crown of Castile. Later, by the Treaty of Torrellas, El Campello and Alicante came under the rule of the Kingdom of Valencia, which in turn fell under the Crown of Aragón. The sixteenth century was marked off the east coast of Spain by constant attacks from Barbary pirates. That is why two towers were built to defend El Campello: the Torre de la Illeta and the Torre del Barranc d'Aigües. The first tower - which stands out with its size - can be found near the harbor. The second tower is located on a hill in the north of the municipality. From this point, you get a view of the Mediterranean in all its glory.

El Campello subsequently fell into different hands. In the eighteenth century the foundations were laid to establish a village. The construction of a shipyard on the River Seco would be the start of the fishing district of Carrer la Mar in the nineteenth century. The fishing industry would then play a very important role in the economy. Later, in the early 1900s, El Campello broke away from Alicante as a municipality. After that, the town was able to grow economically thanks to the construction of a train line between Alicante and Dénia in 1914.

Tourism has radically changed El Campello in the twentieth century. The place grew into a pleasant seaside resort with the necessary facilities and infrastructure. You will notice that when you set out from your home in El Campello. When you are not using your private pool, you will probably be enjoying the local beaches. And we cannot blame you. El Campello offers you beautiful beaches where you can relax. Find a spot on the elongated Playa de Muchavista and feel how soft the sand of the Costa Blanca is. For a little more privacy, you can take refuge in a few bays in the immediate vicinity.

You can enjoy the strong maritime character of El Campello in the harbor or at the charming fishermen's houses on Paseo del Carrer la Mar. There is also a two-part monument to fishermen in the municipality, designed by Arcadi Blasco. Other (religious) sights worth seeing are the church of Santa Teresa and the hermitage of Virgen del Carmen.

Those who like to be active can walk or practice water sports along the coast of El Campello to their heart's content. And also for cyclists there are many possibilities in the beautiful mountains on the Costa Blanca. Enjoy an active day by the sea or inland, and unwind in the evening in your comfortable home in El Campello.

Restaurants and bars in El Campello

Not only beach lovers are catered for in El Campello, but also gourmets. The municipality has several excellent restaurants where you can discover not only the gastronomy of the Valencia region, but also flavors of world cuisine.

On the beach promenade of El Campello you can enjoy a delicious meal at the restaurant Brel, named after Jacques Brel. This business started as a pizzeria, but has grown into a contemporary restaurant with excellent pizzas, pastas, meat and fish dishes. The decor is inviting, the venue priceless, and the flavors are convincing. Recommended!

Andra Mari is a restaurant on the Costa Blanca where you can get acquainted with renowned cuisine from the Basque Country. You can enjoy various dishes from this northern Spanish region in a pleasant setting. Be sure to try the fish specialties, but also the starters. The wine list is extensive and you can choose from several menus.

Meat lovers can tick Asador La Vaquería  in their holiday agenda. Located just off Playa de Muchavista, La Vaquería steals culinary hearts with delicious grilled meat, as well as thin pizzas, fish and vegetable dishes. Spain is of course also synonymous with tapas. Don't miss the opportunity to join a traditional tapas bar such as La Masía del Sur during your stay. The Valencia region is the region of paella. At Seis Perlas you can enjoy the Valencian specialty par excellence on the beach promenade. Tasty!

El Campello is also the right place for just a drink. Order a cocktail or una cerveza in a bar with a view of the sea and let that blissful holiday feeling take over.

The Costa Blanca is one of the best golfing destinations in Spain, and during your stay in El Campello you will see why. For example, nearby you will find Golf Bonalba, an excellent place to hone your golf skills. And that with the blue Mediterranean in the distance. During your stay you can also choose El Plantío Golf Resort, Alicante Golf or one of the many other golf courses and clubs in the area

The weather in El Campello

Much of El Campello's appeal lies in the pleasant climate that prevails. In El Campello you enjoy an average of 300 days of sunshine a year and an average annual temperature of 18 degrees. Moreover, it rains much less than in the UK.

That means you will be able to spend much of the year on the local beaches or by your private pool for some welcome relaxation and sunshine.

Buying a property in El Campello

Thinking about purchasing a property around El Campello? Search directly in our properties through the below link:

All homes for sale around El Campello