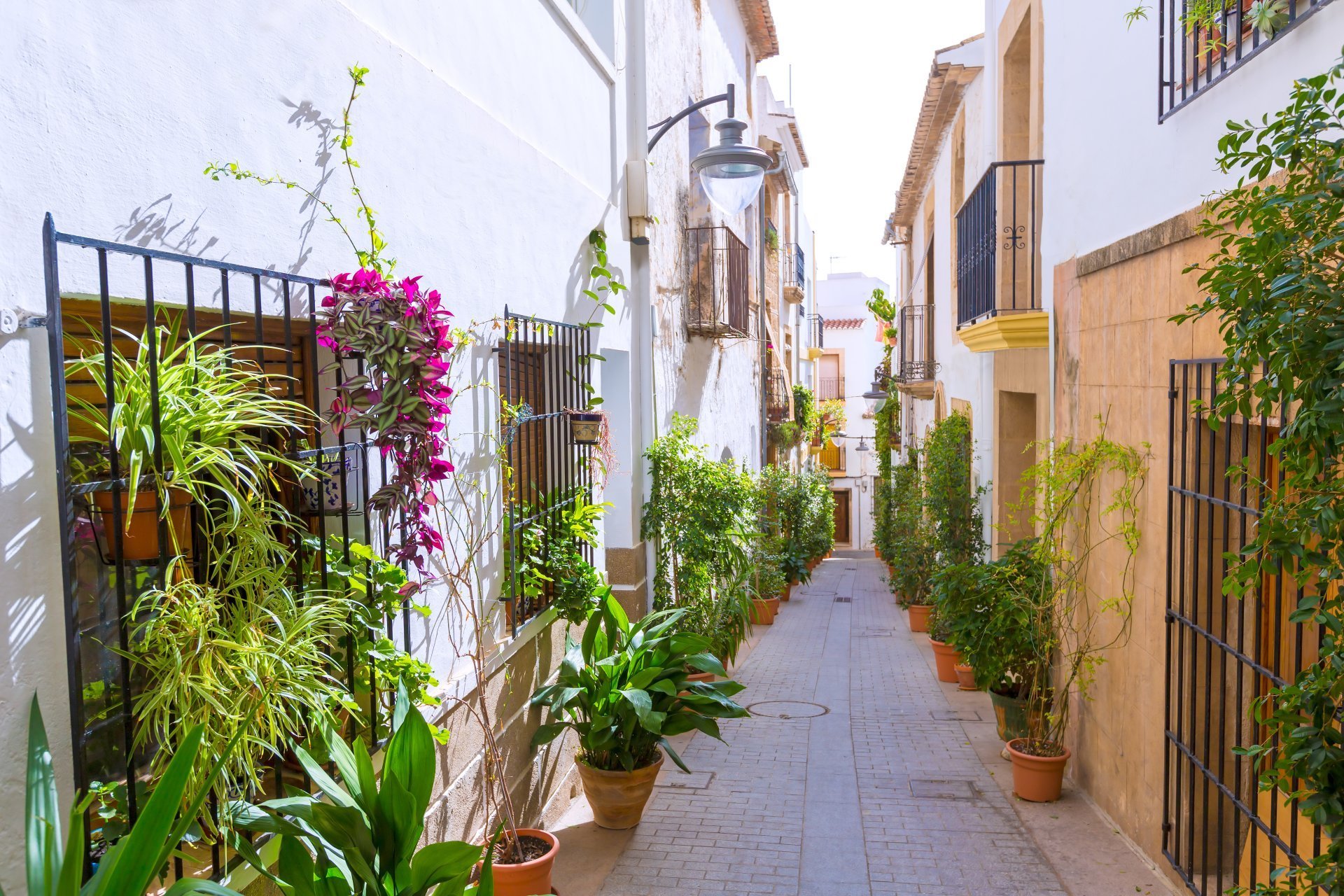 The town of Jávea (officially: Xàbia) is located on the Costa Blanca, for many the most beautiful coastline in all of Spain. You are here in the province of Alicante, in the Spanish autonomous region of Valencia. After about an hour and twenty minutes drive you will reach Valencia, Spain's third city, while Alicante city is just over an hour away. Both cities have an international airport from which you can easily travel further to your home on the Costa Blanca. A car journey of about twenty minutes will take you to the popular seaside resort of Dénia.

Jávea has about 28,000 inhabitants. Both Spaniards and foreigners live there, making it a place with an authentic character and an international appearance. The town is located 48 meters above sea level and has an area of ​​68.59 square kilometers. What is especially striking in Jávea is the beauty of the nature and the beaches along the twenty kilometers of coastline. One of the local beaches, La Granadella Bay, has been voted the best beach in Spain several times. When you visit, you will quickly understand why. Close to Jávea you will find the Montgómassif, a paradise for real nature lovers. There are also many other attractive seaside resorts in the area. We are thinking, among others, of Dénia, Moraira, Calpe, Altea and Benidorm.

What to do in Jávea?

Jávea and its surroundings have a long history and saw different cultures pass by over the centuries. In prehistoric times, people lived in the caves of Montgó mountain. The first documented evidence mentioning Jávea dates back to the reign of King James II. Later, Jávea (County of Dénia) was declared Villa con Consejo y Término. In the early 16th century there were regular plague outbreaks, but according to data Jávea was relatively spared. In 1609, under Philip II, the Moriscas were expelled from the region.

The locals were forced by continuous pirate attacks to live two kilometers inland in a walled settlement. Today that is the historic city center around the church of San Bartolomé. In the War of the Spanish Succession (1701-1713) Jávea sided with the Bourbons. In exchange for that support, it was granted some privileges, such as a license for the export of goods and fruits. The port became the driving force behind the local economy. Agriculture has long played a major role in the livelihood of the local inhabitants. Wheat was especially important, and in the second half of the nineteenth century there was great demand for raisins from abroad.

In the 1960s, Jávea grew into the pleasant tourist destination in the east of Spain that we know today. It is wonderful to relax on beautiful beaches such as La Granadella, El Arenal or La Grava. The crystal clear waters of the Mediterranean and the wonderful surroundings invite you to snorkel or dive. For cycling and walking in a breathtaking natural setting, you can set course for the Montgó massif. A recommended excursion is also the Ruta de los Miradores, the Route of the Viewpoints. During this unforgettable experience you will be presented with imposing cliffs, watchtowers and much more beauty. Bring your bathing suit and a well-stocked picnic basket and spend a wonderful day on the radiant Mediterranean Sea.

The historic center of Jávea will undoubtedly charm you with its narrow, authentic streets and buildings in the typical tosca stone. You will find many shops, as well as cozy restaurants that introduce you to the best of the local cuisine. A landmark that catches the eye is the Church of San Bartolomé, on Plaza de la Iglesia. This church was built in the sixteenth century. It is built in the Valencian Gothic style with tosca stone extracted from the Cova Tallada on the nearby cape of San Antonio. In the past, the building fulfilled both a defensive and a religious function. The clock tower towers above everything and everyone and is clearly visible from various places. In 1931 the church was declared a National Historic-Artistic Monument.

The Church of Nuestra Señora de Loreto, in the Duanes de la Mar district, is another special building in Jávea. Inaugurated in 1967, it is a prime example of avant-garde religious architecture. In the historic town of Jávea you will also find some unique houses. We think of the Palau dels Sapena from the fifteenth century, or the Casa dels Bolufer from the eighteenth century.

To immerse yourself in the history and culture of Jávea, visit the Archaeological and Ethnographic Museum Soler Blasco. This museum is housed in the palace house of Antonio Bañuls. You can admire works by the local painter J.B. Segarra Llamas and study objects found along the coastline. For delicious fresh products from Jávea and the surrounding area, head to the municipal market hall, located in a former nunnery. Enough of the city center? Then you can relax on the beaches nearby, have a drink with a view of the sea, or get a breath of fresh air on the attractive boulevard along Playa del Arenal beach.

Restaurants and bars in Jávea

There is no shortage of good restaurants in Jávea. You will find both restaurants that serve you international cuisine and addresses where you can enjoy traditional regional dishes, such as paella. The BonAmb restaurant, in a stylish country house, has two Michelin stars. Prepare yourself for a culinary experience where you will get to know the local gastronomy and the local flavors.

A little closer to the coast, you can have a nice dinner in Tula, good for one Michelin star. You can enjoy special textures and flavors inspired by seasonal products. In the historic center you will find Volta i Volta. Here, Mediterranean dishes from the region await you with a new look. Other recommended addresses are Estapati Jávea (tapas with a view of Playa del Arenal), El Gaucho (meat dishes) and Restaurante Masena (Mediterranean cuisine in a cozy setting). For paella and rice dishes from the region, you can take a seat at La Perla de Jávea and L'Almadrava (in the harbor). Don't forget to visit the market in your search for good food.

Also for those who just want a drink, there are many possibilities in Jávea, often in an inviting and charming setting. In La Siesta you can enjoy an endless view of the azure blue Mediterranean Sea with a cocktail in hand. A nice spot on Plaza de Baix, in the historic center, is Bar Imperial. You can sip a drink in a beautiful setting and possibly order some tapas to satisfy your rising hunger.

Golf enthusiasts can indulge themselves in Jávea. At the local Club de Golf Jávea golf club, you can let off steam on a nine-hole course surrounded by palm, pine and orange trees. Enjoy the green surroundings, while you hit a ball under the blissful Spanish sun. Those who want to take their first steps in golf can also take golf lessons.

Jávea has a very pleasant climate with an average annual temperature that fluctuates around 18 degrees. In your home you will be able to enjoy about 320 days of sunshine a year and live outdoors almost all year round. Did you know that the climate of Jávea has even been voted one of the best microclimates in the world?

The nearby Montgómassif ensures that Jávea is spared the continental cold in winter, while the sea breeze provides the necessary cooling during the summer. In Jávea you can therefore enjoy mild winters and not very hot summers, as is the case in some other regions in Spain.

Buying a property in Jávea

Thinking about purchasing a property around Jávea? Search directly in our properties through the below link:

All homes for sale around Javea