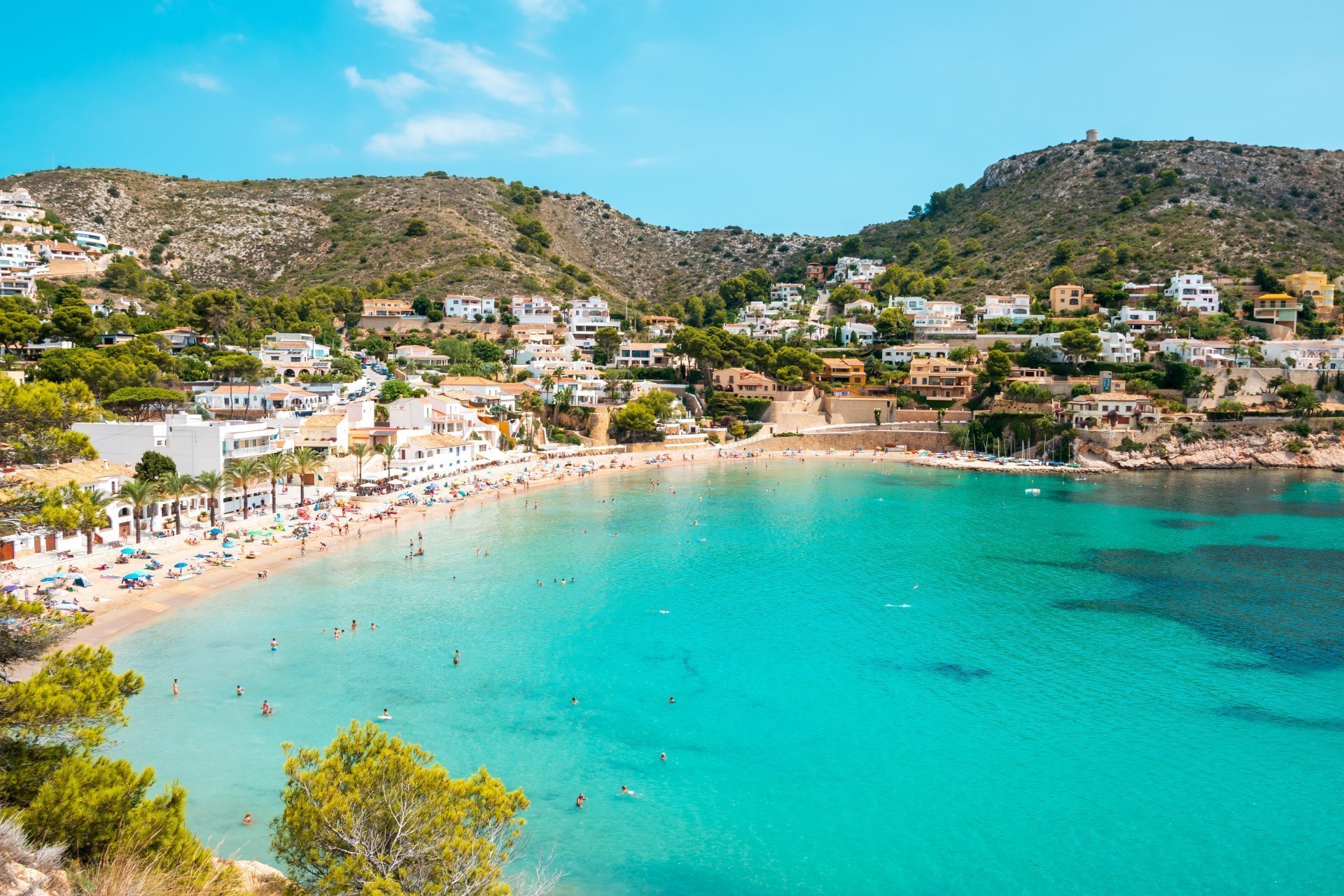 The once small fishing village of Moraira (municipality of Teulada, province of Alicante) has today grown into a popular seaside resort on the Costa Blanca. The city of Valencia is an hour and twenty minutes' drive away, and Alicante city about an hour. These major cities have an international airport that is connected to various UK airports. Near Moraira you will find many other attractive seaside resorts, such as Jávea, Dénia, Calpe, Altea and Benidorm.

Moraira has about 1600 inhabitants. Every year, however, the coastal town is visited by thousands of tourists from all over Europe and by people who have a second home there. They come to enjoy the pleasant Mediterranean climate and the breathtaking beaches of the Costa Blanca. The nature in the Moraira area is lush and inviting and is the ideal resting point during your stay in Spain. There is also no shortage of interesting sights, excellent restaurants and leisure options in this part of the Costa Blanca. The atmosphere in Moraira is calming, relaxed and southern.

What to do in Moraira?

The history of Moraira and surroundings takes us back to prehistoric times. Several relics indicate human presence in the Late Palaeolithic, while there are also traces that the Iberians lived in the area during the Bronze Age. Many centuries later, the Moraira region was conquered by the Moors. They have left their traces in architecture, and various names in the region clearly have a Moorish appearance. The name of Moraira itself, according to a local legend, comes from the Moorish princess "Ira, la mora".

The Moors were expelled during the Reconquista and Christians came to live in the Moraira area. The municipality of Teulada was founded in 1386. The sixteenth century was marked by attacks by Barbary pirates. That is why Philip II decided to have a watchtower built on Cap d'Or. The castle was also finished in 1742, which you can now find in the center.

Teulada was an agricultural village at the end of the eighteenth century, but later the locals also started to focus on fishing. Small warehouses were built on the coast that would later become home to local fishermen. In the seventies and eighties of the twentieth century, international tourism was to play an important role. Moraira has grown into a popular destination with holiday homes and everything tourists dream of.

Thanks to the rich history of Moraira and its surroundings, you can still admire many interesting sights today. For example, you should not miss the castle of Moraira (Spanish: Castillo de Moraira). This fascinating building fulfilled a defensive role. The walls are ten meters high and at the top you can see seven battlements for cannons. From the castle you can enjoy a beautiful view of the local coastline. In the center of Moraira you will find a real gem with the parish church of Nuestra Señora de los Desamparados.

Close to the castle you will find the port of Moraira. Take a walk among the many moored boats and let yourself be carried away by the special maritime atmosphere of this place. For more magnificent views, look up the Cap d'Or. This headland is characterized by impressive cliffs, Mediterranean vegetation and the former watchtower Torre del Cap d'Or.

The beaches in and around Moraira are the main reason for many to travel to this seaside resort. During your stay, you can lay down your beach towel on lovely sandy beaches such as Playa de l'Ampolla or Playa del Portet, while enjoying a good book or the company of your family or partner. On other days, exchange the soft sand for unspoiled, intimate rocky coves, such as Cala del Portitxolet or Cala Cap Blanc. Choose your favorite Moraira beach and feel the clear waters of the Mediterranean do wonders.

Do you like nature and do you like to be active? Then Moraira offers everything you dream of. For example, you can explore the Ruta de los Miradores. This will take you from Playa del Portet to Calle Túnez, where the reward is a multitude of impressive panoramas of the coast and the glittering sea. This trip is approximately five kilometers long and takes an hour and fifteen minutes (outward). The Moraira area is also great for cyclists. The pleasant climate, the excellent roads and the many sights guarantee unforgettable cycling adventures on the Costa Blanca.

Restaurants and bars in Moraira

You will not be left hungry during your stay in Moraira. The range of good restaurants and bars is extensive and varied. Enjoy a drink with a view of the sea and let yourself be pampered with delicious regional dishes. A strong recommendation is El Chamizo, located on Playa Platgetes. You can feast on the Valencian classic paella and other rice specialties, or delicious fish and meat dishes. There are also several options for vegetarians. You will certainly find a matching wine on the extensive wine list.

Another recommended place for a snack and a drink is Algas L'Andragó. This beach club / chiringuito offers you a pleasant and stylish setting to drink a cocktail. To satisfy your hunger, you can opt for a salad, a sandwich, paella, tapas ... Immerse yourself in the pleasant atmosphere of Algas L'Andragó and look out to the sea.

Le Dauphin is also located on the beach, more specifically on Playa del Portet. Enjoy a delicious piece of red tuna, or opt for a steak of the highest quality. To finish, you can choose from several sweet desserts, including crème brûlée and tiramisu.

An extra tip: do not forget to taste the drink Mistela during your stay. That is made from the local moscatel grape. You can buy a bottle of this at Bodegas Antonio Llobell Cartona (Teulada).

Avid golfers will get their money's worth while staying on the Costa Blanca, and Moraira is no different. In the area there are several golf clubs for different levels. At Club de Golf Ifach, in nearby Benissa, you can work on your golf skills with a view of the Mediterranean Sea and the imposing limestone rock Peñón de Ifach. You can let off steam on nine holes and also take golf lessons. From Moraira you can also easily divert to other golf clubs. We are thinking, among others, of Club de Golf Jávea, , Altea Club de Golf, Melia Villaitana Golf Club  or Club de Golf Oliva Nova. The choice is yours!

Moraira has a very mild climate. Summers do not get too hot thanks to the frequent sea breeze. Winters are mild and never really cold because the surrounding hills hold back the cold. That makes it pleasant to stay in Moraira all year round, and that you will be able to spend many days on the beach. You will be able to live outside for a large part of the year and have a drink on a terrace whenever you want. On an annual basis you can expect in Moraira about 320 days of sunshine a year and an average temperature of 18 degrees. Moreover, there is little rainfall compared to the UK. Ready for a life under the Spanish sun?

Buying a property in Moraira

Thinking about purchasing a property around Moraira? Search directly in our properties through the below link:

All homes for sale around Moraira

Fill your preferences within only a few minutes.

Within a few days you will receive a first selection of properties.